Despite assurances by the cathaoirleach of Sligo County Council Councillor Joe Queenan that there will be no closure of libraries in the county, campaigners against library cuts remained unconvinced. 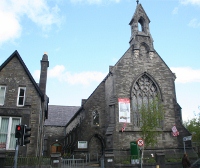 Speaking ahead of a protest in Sligo town last Friday, Cllr Queenan said that no library will be closed.

Councillor Queenan said he believed progress was being made in ongoing discussions with the Department of the Environment concerning the Council’s Financial Plan. The Cathaoirleach also said he believed the Council’s Library services can be secured and options were being explored to see how the necessary resources can be re-allocated within the Council to ensure the continuation of this vital community service.

Over 300 people attended the lunchtime protest in Sligo on Friday against the closure or reduction in any library service in the county.

The protestors assembled at Connaughton Road car park and marched down to Stephen Street to the main library.

The protest was organised by the Enough is Enough campaign and was supported by the Ballymote Library Action Group and as well as people from Tubbercurry concerned that their library could also be affected.

The protest was attended by many families angry at the possible loss of library services.

A deputation from the Enough is Enough group was met by the County Council CEO Ciaran Hayes and Director of Services Dorothy Clarke. Afterwards a spokesperson for the group said that although the council officials were working hard to ensure there would be no closures, nothing was guaranteed and no decisions had been made.

Writer Brian Leydon, a member of the Enough is Enough deputation, said afterwards that they needed to keep up awareness.

“The upshot is that no library is safe at the minute”, he said.