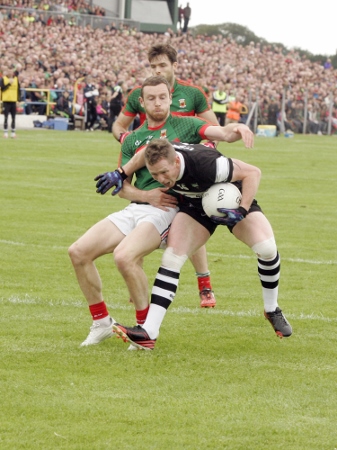 SLIGO were mercilessly destroyed by mighty Mayo in the Connacht GAA Senior Championship decider at Hyde Park yesterday (Sunday) as the defending champions made it five titles in-a-row in a horribly one-sided showdown.

Inspired by the unmarkable powerhouse Aidan O’Shea, who scored 3-4, with Cillian O’Connor also on song with a contribution of 1-7, Mayo easily completed the ‘Drive For Five’ to move into the last eight of the All-Ireland series.

Shell-shocked Sligo, who held justifiable ambitions of running the champions close, never recovered from Mayo’s brilliant start that saw the green and red machine lead 2-4 to 0-0 by the ninth minute.

But this score failed to halt the Mayo juggernaut because the winners goaled for a fourth time, Aidan O’Shea again on target, 60 seconds after Egan’s strike.

Sligo, who continually worked the ball out of defence via short kick-outs, could have been much further behind but goalkeeper Aidan Devaney kept out efforts from Aidan O’Shea and Cillian O’Connor, while Jason Doherty drilled a low shot wide when a goal seemed likely.

Adrian Marren, who scored two points in the first-half, had a pop at goal denied by Mayo net-minder David Clarke.

The second-half saw Mayo add a further 18 scores, 2-16. Aidan O’Shea completed his hat-trick in the 51st minute – yet again from a high delivery into the Sligo goalmouth – and a minute later wing-back Lee Keegan fisted the winner’s sixth goal from a Cillian O’Connor cross.

Sligo, overwhelmed in all sectors, at least kept battling and Pat Hughes’ fine goal after 55 minutes was a reward for his industry.

Mark Breheny, who was appearing in his fifth Connacht Senior final, had a goalbound effort saved following good work by David Kelly and Adrian Marren. Breheny’s fourth point, Sligo’s 11th, was a goal shot that fizzed over the Mayo crossbar after 68 minutes.

Cian Breheny, Mark’s nephew, scored an impressive second-half point – one of the few Sligo highlights on an otherwise forgettable afternoon.

Niall Carew’s shattered side must regroup for the GAA Football All-Ireland Senior Championship Qualifiers – a win over Tyrone on the Saturday after next would put them into the All-Ireland quarter-finals.

The only slight consolation after this sapping loss is that Tyrone do not possess a player of Aidan O’Shea’s calibre.

Player of the Match: Aidan O’Shea