Poignant tributes to the many hundreds of sailors who lost their lives in the Spanish Armada wrecks have prompted political debate and gained widespread exposure in Spain. 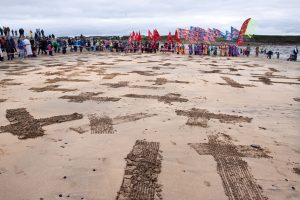 A wreath laying ceremony and a tribute consisting of over 1,000 crosses marked in the sand at Streedagh beach, was a focal point of the Celtic Fringe Festival held in North Sligo over the weekend.

And the ceremony was picked up by two Spanish media outlets, leading to calls that the country do more to honour the victims of the Armada who died 427 years ago.

One of the articles painted a picture of the ceremony which many Spaniards found moving, according to comments shared on social media.

(Translated) “Hundreds attended the ceremony, and they gave a silent tribute to the fallen from La Lavia, La Juliana and La Santa Maria de Vision, sank by a storm on September 25th 1588.

“The tribute was done in the same place where last June, artefacts from the second of these ships, La Juliana, were recovered from the sea. This recovery came about due to the major storms which struck the western coast of Ireland last Winter which disturbed the seabed which had hidden the ship for more than 4 centuries.”

Although we refer to the tragedy as the Spanish Armada in this country, in Spain it is called the ‘England Enterprise’ and is still seen as something of a national humiliation.