In support of raising awareness about the importance of organ donation, solo artist, Markus Feehily took time out from his touring schedule to visit Sligo University Hospital, where he met staff, dialysis patients, a living donor and transplant recipients.

The event was organised by the Sligo Branch of the Irish Kidney Association to announce the annual life-saving awareness campaign which will take place from April 2-9.

At the event the former Westlife star met a familiar face, Maria Fowley, who underwent a kidney and pancreas transplant in 2011. The two have known one another since he was a child living in the same neighbourhood Calry and he attended the same school as Marie’s son Sean. 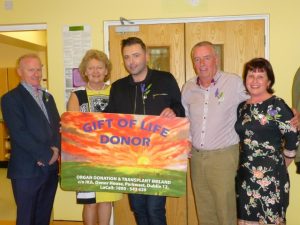 Marie said: “I have known Markus since he was a little boy. I witnessed first-hand his fledgling singing career.

“I was part of the organising committee for Scór na n”g and we knew we were in the presence of a rising star from the first time he sang as he had the voice of an angel. We are delighted that Markus has taken time out of his busy career to support us in launching Organ Donor Awareness Week.”

Speaking at the launch, Markus said, “I feel honoured to have been invited by Marie’s husband Sean to attend the event here today. When I was a child, Marie was preparing me for Scór Na n”g while all the time her diabetes was a secret part of her life.

“Her kidney failure came in the years that followed.

“It came as a big surprise to my parents and the community years later when we heard that she had received a double transplant of a kidney and pancreas a few years ago.

“I feel privileged to be here today amongst Marie and other inspirational people who have all faced uncertain futures because of organ failure and who are united in their wish to honour their organ donors.

“It’s humbling to meet so many patients in the dialysis ward here today whose kidneys have failed and they are just getting on with their treatment while hoping to be called for life saving transplants. It is wonderful to witness the dedicated nursing staff who take such good care of their patients.

“I would encourage everyone to discuss organ donation with family members and let their wishes be known. I hope people will support the Irish Kidney Association volunteers who will be selling forget-me-not flowers and other items in Sligo town and county and the rest of the country during Organ Donor Awareness Week.”