North Sligo independent councillor Marie Casserly will formally launch her bid to be elected to Dail Eireann in Barry’s in Grange on Sunday night. 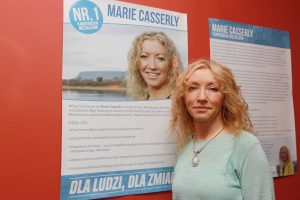 Explaining her decision to go for one of the four seats in the new Sligo-Leitrim constituency in the next election, she said she felt it was “the next natural step” for her.

“The north west needs an independent voice to shout for it in Leinster House.

“If I’m lucky enough to be elected I will shout for the north west and I will keep shouting for it.”

Cllr Casserly, who was elected to Sligo County Council for the first time last year, believes that the region is not getting what it deserves in terms of investment.

“There have been lots of promises, but I think it is time we started demanding more and focusing more attention on this region”, she said.

She said that there were a lot of people working very hard at community level throughout the region and she believed there was a lot of potential in the north west, which she felt “passionately” about.

But she felt there was a huge gap between what was being done on the ground and what was happening at national level.
“Sometimes it feels like we are in a parallel universe.

“People are working very hard but they are getting very little help”, she said.

A post-primary teacher at St Mary’s College in Ballisodare, she said that she realised that she would also have to work on national issues such as education and health.

But she said that she would be “unashamedly promoting the north west”.

As to her chances of being elected, she said that independents were doing very well in the opinion polls.

“I think people are crying out for change” she said and acknowledged that it was going to take “a lot of hard work”.

“I am more than happy to take that on as I feel the end result will be worth it,” she added.

She said the north west was “worth fighting for”.

“That is what we need to do to keep jobs here and to keep our kids in our communities.”