The Glens Centre’s musical offering for the month of November is a unique concert with Claudia Schwab, Marti Taern and Stefan Hedborg, joined on the night by Leitrim-based musician, composer and poet Pádraig Meehan. 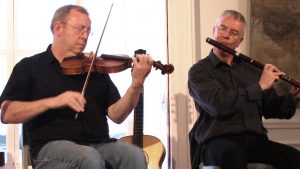 She teamed up Marti and Stefan at the international folk music camp ‘Ethno Histeria’ in Slovenia in 2012 and the Trio are back together once more for their Tour Of Ireland.

Musician, composer and poet Pádraig Meehan (Those Nervous Animals) recent projects include the Dromahair Steampunk Club, an arts experiment in music and spoken word, and a band called The Electric Sibin.

He has been an art student, a pastry chef, a cinema projectionist and the songwriter and guitar player in Sligo pop band Those Nervous Animals.