A very successful commemorative evening was held in South Sligo on February 27 to honour the great fiddle player Fred Finn who was from Kiltycreen in Killavil. 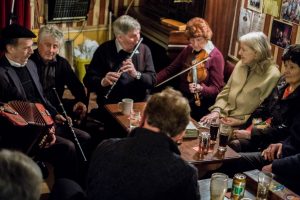 Apart from his unique ability as a fiddle player he was known as a character with an exceptional wit and is clearly still missed by all those who knew him even though it is 30 years since his death on January 26, 1986.

The commemorative evening was attended by Fred’s sisters Bea and Tilly and many of his extended family members who travelled long distances to be in attendance.

The evening commenced with a special mass celebrated by Fr. James McDonagh in the Church of the Immaculate Heart of Mary in Killavil.

This was followed by refreshments in the Coleman Irish Music Centre in Gurteen where afterwards a presentation was given by Philip Duffy on the life and music of his friend and mentor.

The evening was rounded off with a massive lively session of music in the Róisín Dubh, Gurteen hosted by Jacky McGowan. In attendance were many of the musicians who knew and played with Fred during his life.

The evening was particularly successful in that it introduced a new generation of musicians and music lovers alike to the distinctive, unique, traditional style of fiddle playing from South Sligo.