City Hall in Sligo was packed with guests, many in Spanish Navy uniform, for a Gala Reception on Saturday evening last. 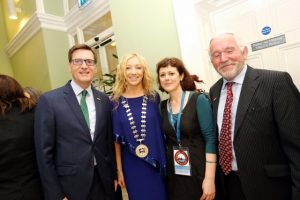 The occasion was the arrival into Sligo of the Spanish Navy ship the OPV Centinela. Several senior officers from the vessel were in attendance at the reception, including its captain, Lieutenant Commander Miguel Romero Contreras.

There to welcome them was Mayor of Sligo, Cllr Marie Casserly. After a reception in the foyer of City Hall, guests were welcomed into the main council chamber.
The distinctive u-shaped council table had been repurposed as a boat, with benches placed in the centre and two temporary masts in place to add to the atmosphere. 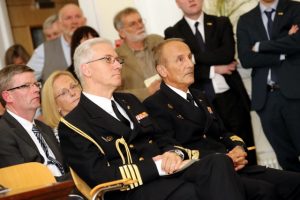 Addressing the dignitaries and guests, Mayor Casserly said that she was honoured to host the reception “as Mayor of Sligo and a native of Streedagh”.
She thanked Minister Ross and used the occasion to stress the importance of the Spanish Armada story, not just in historic terms, but in the potential to attract investment and tourism to North Sligo.

“For too many years the story of the Spanish Armada was largely forgotten, told only in folklore and songs within the North Sligo Community. Thankfully, this is now changing,” she said.

We have a full two page spread from the Armada reception can be found in this week’s edition of the Sligo Weekender- out now.